If you were to walk into a third grade classroom ten years ago you would expect to find children seated at their desk working in the handwriting notebooks we all remember so well, one for print and one for cursive. You can probably still make out the dashed outline of the first letter on each row guiding your number two pencil as it moved from left to right across the page. But walk into a third grade classroom today and you will be hard pressed to find those special notebooks that earned you a sticker for perfect penmanship. In its place you find clusters of computers and iPads with children wearing headphones pounding away at keyboard fingering games. We entered the 21st century and shifted from industry to information and with it came an emphasis on the development of knowledge over the development of physical skills. As a result, educators have begun to abandon physical instruction of practices that are no longer in use due to the advent of technology. Cursive handwriting is the most recent victim of this shift. Indiana state regulation, for example, under the Common Core State Standards Initiative for best education practices states that cursive is no longer required to be taught and instead will be replaced by keyboarding.[i] Many modern educators have neglected cursive in exchange for promoting keyboard fluency and can you blame them? When was the last time you sent a handwritten cursive letter? You don’t; you e-mail. But if you wanted to, you know how and could do it with ease because you were taught. What you may not realize–and what many educators do not realize– is that by learning cursive you were not merely learning how to communicate in another font, you were building the neural pathways necessary to stimulate brain activity that enables language fluency and vision-motor control important for cognitive development, learning, reading, sports, socialization and everyday tasks.

Without recognizing it, those repetitive cursive handwriting drills we did as children were some of our first and most basic steps in developing our cognitive abilities. Fine motor skills are the building blocks our brains need to connect and make sense of the world around us—better known as our proprioceptive and vestibular senses. Understanding and knowing how to form letters on lines to a certain shape and size, at a certain angle, in real time and space comes through the fine motor control of the hands and arms. Cursive handwriting naturally develops sensory skills, as they are called, by taking advantage of a child’s inability to fully control their fingers. Through repetition the child begins to understand how much force need be applied to the pencil and the paper, positioning of the pencil to paper at the correct angle, and motor planning to form each letter in fluid motion from left to right. This physical and spatial awareness allows them to write but more importantly builds the neural foundation of sensory skills needed for a myriad of everyday tasks such as buttoning, fastening, tying shoes, picking up objects, copying words from blackboards, shaking hands, and most importantly, reading! Unfortunately we are abandoning the activities that allow for this physical development to take place and instead we have a growing population of children who require remediation and “therapy work,” such as pushing on walls, medicine ball exercises, or handstands to fully develop proprioceptive abilities that in earlier generations were commonly developed in everyday life. 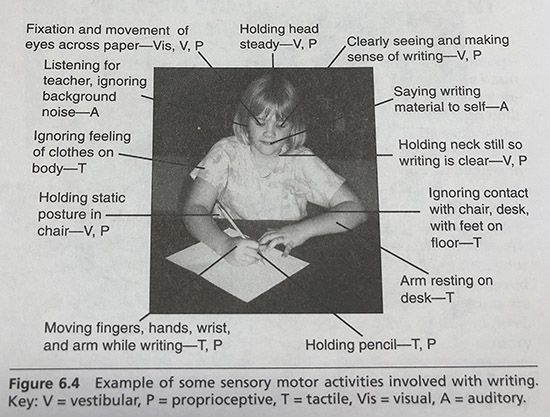 Over the past few years doctors and specialists alike have been working to understand and educate the masses on the effects of educating the mind alone. As Pulitzer Prize nominated neurologist Frank Wilson wrote in his book, “The Hand: How its Use Shapes the Brain, Language, And Human Culture,” “teachers should not try to educate the mind by itself.” If educators continue to dissolve the disciplines that involve the hands and the body in full movement, much of the knowledge will be poorly processed and inadequately learned.[ii]

Iris Hatfield is one of the strongest proponents of the connection between handwriting and brain development and is the creator of the New American Cursive program. She states, “cursive improves neural connections in the brain,” and stresses physiological movement of writing cursive letters to “build pathways in the brain while improving mental effectiveness.”[iii] This idea is echoed by researchers R. Shadmehr and H. Holcomb at Johns Hopkins University who have published studies showing PET scans of their subject’s brains changing in reaction to physical instruction such as cursive handwriting. Cursive writing forces the hands to cross the midline of the body, stimulating brain activity and increasing the potential for learning. The changes evident in the scans demonstrated an immediate improvement in fluency and a later development of neural pathways, thus proving that as a result of practicing motor skills, knowledge becomes more stable.[iv]

It is a grave misconception to believe that promoting keyboard fingering fluency will develop the minds of students as much as traditional cursive handwriting lessons once did. Typing is a homolateral act using one hemisphere of the brain separately from the other hemisphere. Since a child’s hands do not cross the midline, the corpus collosum (connecting fibers of the two hemispheres of the brain which allows inter-hemispheric communication) is not being developed. Keyboarding has its own benefits to brain development and is a necessary tool for a 21st century lifestyle that should be taught in conjunction with traditional print and cursive disciplines to set our children on the path to success. To quote first-century Roman writer, Marcus Quintilanus, “too slow a hand impedes the mind,” and we cannot afford to have our children be any slower.

[i] http://www.corestandards.org (Visited June 1, 2011). Indiana is not the exception; almost all fifty states are now in compliance with the CCSSI. This paper in no way suggests that the CCSSI is a negative institution and supports its efforts to seek out and establish nation-wide best practices in education. It is unfortunate that the teams in charge of designing the greater scope and sequence curriculum were not more informed on the effects of eliminating physical instruction and is such the purpose of this submission to inform and correct.
[ii] The Hand: How its use shapes the brain, language, and human culture. Frank R Wilson. First Vintage Books Edition, September 1999.
[iii] http://www.newamericancursive.com/docs/NAC Why Teach Cursive.pdf (Visited June 1, 2011).
[iv] http://www.helium.com/items/197736-cursive-handwriting (Visited June 1, 2011). Source article location change.
Graphic Source: Cheatum, Billye Ann, PhD.  Physical Activities for Improving Children’s Learning and Behavior, A Guide to Sensory Motor Development. Human Kinetics, 2000.